he 2012 NBA Finals begin tonight in Oklahoma City as the Thunder host the Heat. TSN will show every game live in Canada. Coverage will begin an hour before tip with a TSN pregame show from Toronto. TSN will then simulcast ABC’s coverage from 30 minutes before tip (NBA Countdown) through the game. ABC’s commentators are Mike Breen and Jeff van Gundy.

TSN has basketball fans covered for the final round of the NBA Playoffs, as Kevin Durant and the Oklahoma City Thunder battle LeBron James and the Miami Heat for the prestigious Larry O’Brien Championship Trophy in the 2012 NBA FINALS. The series tips off tomorrow (Tuesday, June 12) at 8 p.m. ET on TSN, with the network producing a special 30-minute pre-game show before every match-up (see complete broadcast schedule below).

This year’s NBA FINALS is the fifth time since 1967 that the NBA’s leading scorer (Durant) and MVP (James) will compete for the league championship. The Miami Heat are making their second straight appearance in the FINALS, with the superstar trio of James, Dwyane Wade and Chris Bosh trying to achieve their goal of bringing a championship title back to South Beach. However, the Heat will be in tough against the Oklahoma City Thunder featuring three-time scoring champion Durant, Russell Westbrook and James Harden, who was voted the 2012 Sixth Man of the Year.

Here is the complete schedule. Tip times (in Eastern) are listed. TSN’s coverage begins an hour before tip, while ABC’s begins 30 minutes before tip. All games are on TSN and ABC. 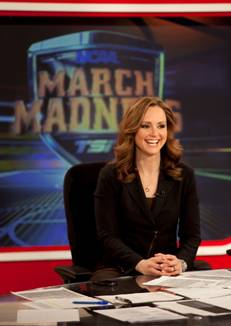 Right then, after a crazy opening round that saw two 15 seeds move on, the NCAA basketball tournament settled down a bit over the weekend. Ohio, a 13 seed, are the lowest seed remaining. One could say the same about TSN’s television coverage in Canada. It started off a bit shaky, but seemed to fall into place over the weekend. There are always those who are dissatisfied with television coverage of a sports event, especially here in Canada where Canadian networks have to live up to the high standards of their US counterparts. However, based on the reaction I received, many viewers think TSN’s coverage has improved significantly from last year.

As a couple of readers said, you can’t beat CBS’s coverage. I couldn’t agree more with this. CBS, especially with TNT’s NBA personalities included, does a spectacular job with the tournament. Let’s not kid ourselves, TSN’s coverage could probably never be as good as CBS’s. But neither could any other Canadian network’s IMO. There just aren’t any basketball studio hosts the calibre of Ernie Johnson or Greg Gumble in Canada. And while Jack Armstrong, Leo Rautins and Sherman Hamilton are knowledgeable, they aren’t Kenny Smith, Charles Barkley and Seth Davis.

So what has TSN improved from last year? A lot in my opinion. Kate Beirness is more knowledgeable about college hoops than James Cybulski. Not to mention she is a better studio host. Cybulski stumbled over his words and often made mistakes last year. It seems many agree that Beirness looks like did her research before the tournament. She looks prepared.

The rest of TSN’s studio coverage is just about the same as last year. Although Hamilton, Armstrong and Rautins seem more prepared this year than last. Of course all three have a full-time job covering the Toronto Raptors, so much like Barkley and Smith on American TV, they don’t spend most of their time from November until March watching college hoops.

The formula for TSN’s game selection is quite simple. They have usually selected games with a Canadian playing in them. Which is the right move. They have shown some games that are also on CBS, but I don’t see a problem with this when there is a Canadian angle. TSN is a Canadian network, the easiest storyline to draw in the average sports fan (and non-sports fan alike) is when a Canadian is playing. When there are no Canadians, the best game seems to take precedence. TSN also seems to shy away from using CBS coverage when only TSN or TSN2 are showing coverage (and there are others game on). Again, this is the right move. If I had one complaint about TSN’s game selection it is they stay with games that are over a bit too long.

One major way TSN could improve their coverage is online streaming. Many people are at work on Thursday and Friday afternoon. TSN could probably do reasonably well with online streaming. The NCAA’s service is no longer available to Canadians as of this year.

I received one comment saying theScore’s coverage was better. One reason for this (from the same person) was that TSN doesn’t show the whole tournament. This is where I think it is worth pointing out that TSN had 24 (it was actually closer to 25) hours on coverage on Thursday and Friday. Equal to what theScore had in the past. TSN2 supplemented coverage with about 20 hours. There is no possible argument that TSN showed less on Thursday and Friday than theScore.

TSN inevitably had scheduling issues on Saturday and Sunday. On Saturday it was MLS and curling. On Sunday, more curling and NASCAR. When the MLS and NASCAR aired there was only one game taking place. That game was on CBS and TSN2, so again, there is no reasonable complaint. As for the curling, the World Women’s Championship is of national interest (remember what I said about storylines for the average sports fan). It is in TSN’s contract that they have to broadcast those games. And why wouldn’t they? Curling is one of the five most watched sports in Canada.

In total, there were games taking place between 8:30pm ET and midnight on Saturday when TSN wasn’t broadcasting coverage (and CBS was on until 10:30). On Sunday from the time CBS went off the air at 7:30pm, TSN came on from 7:30-9:30pm. There was no coverage on Canadian basic cable from 9:30pm until midnight on Sunday.

So, those with basic cable missed out on about 3 hours of the first 48 hours of coverage. Not too bad. Perfect? I suppose not. Certainly better than last year.

As I said, I like TSN’s coverage. I liked theScore’s coverage too, but I didn’t like when I taken from a game I was interested in. At least TSN shows close to full coverage of games. I know not everyone prefers this, but I do. Sure, like many others, I’ll probably move on to CBS next weekend, but I think TSN did a fine job of keeping viewers up-to-date when there was up to four games on this weekend.

Hockey ratings… Basketball fans can bring on the jokes about everything in Canada having to refer to hockey, but I have some hockey ratings from last week. 664, 000 watched Senators @ Canadiens on TSN Wednesday night. That’s less than the Leafs and Canucks draw when they play an American team on Wednesday Night Hockey. Of course Habs ratings have fallen steadily as the playoffs get closer (not for them of course). I hope to have HNIC’s weekend ratings on Monday or Tuesday.

Senators on Saturday… CBC still hasn’t announced the distribution for Hockey Night in Canada this coming weekend. I think Penguins-Senators will go to Ottawa and Atlantic Canada for sure. The Leafs and Habs are both out of the playoff picture, while the Senators and Penguins are fighting for home ice. I think it will also go to British Columbia. Many Canadians receive CBC HD on cable from Toronto and Vancouver. By putting a different game on CBC Vancouver, more Canadians will have access to multiple games in HD. CBC experimented with this earlier this season. I think the Leafs game will air in Alberta though, but I could be wrong. CBC will officially release details early this week.

Formula 1… Ben Edwards, BBC’s new Formula 1 commentator, can get a bit excited, can’t he? Having said that, I think he did a fine job in his first Formula 1 on BBC assignment. It didn’t hurt that he had a thrilling race to call. Him and analyst David Coulthard need to work on their chemistry a bit though. They seemed to talk over each other a bit too much. That will come as they do more races together. Gary Anderson, BBC’s technical analyst in the pits, is a nice addition, but I think he was used too much.

Less McKenzie… BBC seemed to use pit reporter Lee McKenzie sparingly on Sunday. Which was surprising considering popular drivers like Michael Schumacher and Felipe Massa didn’t finish. One reason for this could be because the BBC didn’t show the race live. As a result, they may have just shown all of their interviews at the end of their highlights package.

Fabrice Muamba… Let me finish this by asking everyone to keep Bolton midfielder Fabrice Muamba in your thoughts. Muamba collapsed during Bolton’s FA Cup game against Spurs on Saturday. He is in critical condition. Dan O’Hagan, who commentates on FA Cup matches (he wasn’t working the Bolton vs. Spurs game) said on Twitter, “…would hate to be broadcasting there.” Jon Champion, who was commentating on ESPN in Britain, spoke for the masses when he said “Secretly, we fear the worst, but hope for the best”.