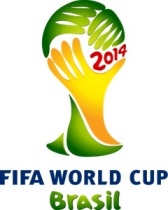 The 32 teams that will be competing in next year’s FIFA World Cup will know their fate tomorrow (December 6) as ping-pong balls will be drawn from Tupperware containers to determine the the draw / venues / dates for the biggest sporting event in the world.

Sportsnet has extensive coverage of the draw from Costa do Sauipe, Brazil. Gerry Dobson, Craig Forrest and Danny Dichio will host the show, Brad Fay will provide news and social media updates, former Canadian international Dick Howard will report live from the draw and ITV’s Andy Townsend will join the panel live from London. Scott Russell of CBC Sports will preview the World Cup broadcast on CBC and Sportsnet next summer.

CBC will also broadcast the draw on their website

Sportsnet and Sportsnet World have announced they have signed new contracts to show various 2014 World Cup qualifying matches. These will include home qualifiers and friendlies for England, Germany, France, Italy and Spain.

Here is the press release.

Sportsnet, Canada’s premiere destination for all things soccer, today announced it has secured the Canadian multimedia rights to more than 250 soccer matches, including qualifiers and friendlies, leading up to the 2014 FIFA World Cup Brazil.

The new package features a comprehensive suite of multimedia rights including television, online and mobile – headlined by all qualifier and friendly home matches for Germany, France, Italy, Spain and England from the Road to Rio.

“Sportsnet is committed to fueling fans with premium soccer content across multiple platforms,” said Navaid Mansuri, Vice-President of Finance & Sports Programming, Rogers Media. “We are thrilled to be leading Canadians down the exciting road to the 2014 FIFA World Cup for the next two years and providing soccer fans with access to matches featuring the world’s top ranked teams as they prepare for the most illustrious soccer event in the world.”

Sportsnet’s coverage leading up to the 2014 FIFA World Cup includes teams from Canada, Spain, Germany, France, Netherlands, Portugal, England, Croatia, Italy, Greece and the Czech Republic. Coverage kicks off on June 8 with Canada vs. Cuba. (Full broadcast schedule to be released at a later date).

The Canadian men’s national soccer team begins its journey to the 2014 World Cup on Friday night at BMO Field in Toronto. Canada, ranked 102nd in FIFA’s rankings and 10th in CONCACAF last qualified for the World Cup in 1986 in Mexico. Canada’s journey begins with second round CONCACAF qualifying. Canada are in a fairly easy group, along with 122nd St. Kitts & Nevis, 144th Puerto Rico and 184th ranked St. Lucia. The winner of the group earns a spot in the next phase of CONCACAF qualifying.

Rogers Sportsnet One will show Canada’s 3 home matches during this stage. Sportsnet’s partnership with Soccer Canada gives them the rights to these games. Away games have to be purchased separately from the Football Association of the country Canada is playing in, or in some cases from a 3rd party provider. So far Sportsnet has only acquired rights to Canada’s away match in Puerto Rico next Tuesday.

Gerry Dobson and Craig Forrest will be in the broadcast booth to call Canada’s World Cup qualifying games. Ryan Leslie will be a sideline reporter.

Lastly as a soccer fan, if you live in the Toronto area, go out and support our national team. I know that if they ever play a qualifying match in Moncton, I’ll go. Let’s make Canada a place where CONCACAF teams will hate to go over the next two years.