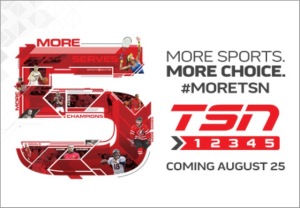 Circle your calendars, people!! Monday morning at 10:30am ET, TSN will go from having two national channels to five in a bid to remain the number one sports network in Canada in light of losing the national NHL rights to Rogers. Announced back in May, TSN and TSN2 will become TSN 1 through 5 as three additional channels come online just in time to broadcast the final tennis major of the year, the US Open from Flushing Meadows in New York. All channels will be available on TSN.ca and the TSN GO app.

Four of the five TSN’s will be used as regional feeds for NHL games this season, doing away with alternate channels such as TSN-Jets and TSN-Sens which were only available in that particular market. Similar to how Sportsnet’s channels are broken down by region, TSN will be similar, as follows:

TSN haven’t stated outright this is how it structured, but based on the release of their regional games for the Senators, Leafs and Jets, as well as other information, it should follow this pattern. I don’t know at all the way most cable/satellite TV packages work across the country, but if regular/current TSN is part of the basic package, that will switch to the TSN associated with your region. For example, regular TSN in Montreal will become TSN 5 as the basic/default TSN channel. At times, TSN 1, 3, 4, 5 will be showing the same programming for big events in order to reach the maximum number of viewers possibly (those with only basic cable).

The following providers have signed on to have all five networks available to customers (Videotron seems to be the biggest name that is missing):

UPDATE: Channels listings for each provider can be found here.

The TSN presser about the new channels touts “more live game coverage, more choice of games/events taking place at the same time, expanded coverage of marquee live events, and effective scheduling of TSN studio programming”. This is noticeable from day one. TSN will dedicate four channels (TSN 1, 3, 4, 5) to showing four different feeds from the US Open (a more detailed US Open post to come later this weekend). Two feeds will feature dedicated court coverage, another will be ESPN’s feed featuring interviews and court-to-court coverage (jumping around to certain matches) and the fourth will also be court-to-court coverage (possibly the feed from the Tennis Channel).

Here is what the first week looks like as per my Bell guide:

So there we have it. More US Open than ever before, more EPL than before, more college football and more NASCAR, and that’s just week one. Seems safe to say this will be nothing like the way Sportsnet uses their four regional channels, showing the same programming 95% of the time. If you only have one TSN channel on your cable package, prepare to miss out a lot of sporting action in the future (then again, that’s the point right? To get more people to subscribe to a higher-tiered package to get all five channels).