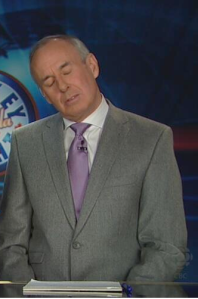 [Note: So nobody misunderstands my intentions, it is best if most of this is read in a sarcastic Stephen Colbert-type voice]

Anyone ever wonder what Don Cherry thinks of female reporters in NHL dressing rooms? Well, now that he’s announced it in all his glory on Coach’s Corner tonight, everyone knows. And for him and the CBC, that’s probably not a good thing. It all started when Cherry felt the need to chime in on Duncan Keith’s slightly sexist remarks earlier in the week when a female reporter interviewed him. Cherry basically said Keith’s quote was a non-issue. Which I actually agree with a bit. I’ve heard the interview a few times and I’m not convinced he meant any harm.

This led to the point Cherry really wanted to make, which was, “…and I really believe this, I don’t believe women should be in the male dressing room.” The look on Ron MacLean’s face (top right) really says it all. And as if that wasn’t bad enough, Cherry followed it up with, “I don’t feel women are equal; I feel they are on a pedestal and they should not be walking in when naked guys are walking in.” Here is the entire video:

Cherry went to one of the oldest white male tricks in the book, that white men are in fact the ones discriminated against. And why wouldn’t he considering how well it’s worked for those who claim black people have better rights than white people? Surely this last line from Cherry is the one that really took it over the top.

As is usual with Cherry, it isn’t hard to find him expressing a similar opinion from 20 years ago. Back in the good ‘ole days when women weren’t allowed in locker rooms for fear they might look at penises and get excited, they were still causing problems at NHL hockey games. Yes I know, hard to believe, but women have caused problems at hockey games ever since they were first allowed in the arenas. Here is the old video (notice MacLean’s similar reaction at 0:23):

I think CBC should suspend him, but likely they will just ask him to apologize next time he is on-air Tuesday or Wednesday. And this certainly isn’t the first time Cherry has stirred up controversy around the start of the playoffs. See this post from April 18, 2011 when he laughed off the problem of concussions.

Remember this kind of thing is what got Richard Keys and Andy Gray fired at Sky Sports. And they didn’t knowingly say it on-air. Cherry did. Other than that I don’t know what to say. The videos really speak for themselves.

8 thoughts on “Don Cherry on Women in NHL Locker Rooms”

What do you think? Cancel reply