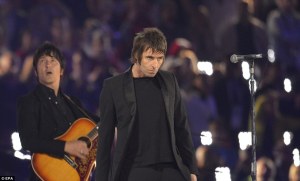 As many readers may know, Oasis mean more to me than any other band. Period. They’re my Beatles, or whatever (not to say they’re better than the Beatles). Beady Eye performed at the Olympics Closing Ceremony tonight. They did the biggest Oasis hit internationally, 1995’s Wonderwall. It seemed to ignite a firestorm, among Oasis fans and others. Not only did I not have a problem with it, I was happy. Here’s why. (Note: if you come here for sports media, you may just want to skip this one. Just needed to get it off me.)

One thing that really bugs me is the use of “cover band” or “Liam’s new band”. NBC went as far as to call them The Bootleg Beatles, except for Oasis. I grew up with the last line-up of Oasis. All the big songs that I remember coming out (Stop Crying Your Heart Out, Lyla, Shock of the Lightning) featured the line-up of Liam, Noel, Gem Archer and Andy Bell. This was the line-up from 2001 through the break-up of Oasis in 2009. Drummer Chris Sharrock joined them for their last world tour. As much as I liked the originals with Bonehead, Guigsy and Alan White, this was the lineup I grew up with.

Archer and Bell (as well as Liam, obviously) performed Wonderwall, Morning Glory and Rock n Roll Star live most every night for ten years together. If they choose to do the same with Beady Eye, it doesn’t make them a cover band. Despite the fact that Noel wrote them (and is receiving royalties on them), this is the exact same line-up that played them for ten years. Only difference is movement on instruments (Archer to lead/acoustic guitar, Bell to rhythm guitar and a new bassist) and the lack of Noel, who isn’t exactly a great guitarist in his own right.

Also important to remember, Noel left Oasis. Therefore, in my mind at least, Beady Eye is the continuation of Oasis. Nobody would be complaining if Noel showed up and did his current (boring, in my opinion) version of Wonderwall. Noel turned the opportunity down.

Let’s be honest, if Noel was there Liam wouldn’t have sang the song any better. So, there is no way anyone can say the performance would have been better if it was Oasis. Anyone can play it on guitar, especially Gem and Andy.

Anyway, I’ve had enough of everyone slagging off on members of my favourite band. Were Liam’s vocals 1996-esque. No? But we’ll never see that again. An Oasis reunion won’t revive his vocals. But, he was a lot better than Jesse J.

Leave a Reply to Keith and Cliff Cancel reply